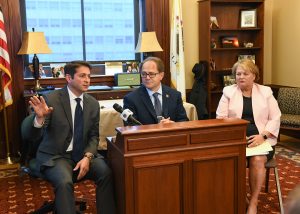 “The Governor’s flip-flopping on independent maps further enables this broken system in Springfield that for decades has allowed a select few to run our state government into the ground,” said McConchie. “The Governor made a promise to the people of Illinois who deserve to hear how he intends to keep that promise. He can easily do that by testifying at one of our bipartisan hearings or supporting our independent maps legislation.”

Public polls have shown more than 75 percent of Illinois voters support an independent process that puts citizens in control of drawing election districts instead of the politicians.

“The Governor had a choice, and he chose the political insiders over Illinois families,” said Barickman. “There is still time for the Governor to do the right thing and live up to his promise to voters. The solution is right here before him. Is he a politician that will say anything to get elected, or is he a man of his word?”

The Senate Republicans have sent multiple official letters to the Governor to request that he or a senior member of his staff testify at one of many virtual or in-person redistricting hearings. To date, his office has declined or not responded to all requests.

“It’s obvious the Governor wasn’t truthful with voters when he said he supported an independent remap process in 2018,” said Bryant. “The Governor’s refusal to participate shows he only cares about keeping the status quo of one-party rule in the capitol – not keeping his promises to Illinois voters.”

Gov. Pritzker has supported independent redistricting on numerous occasions. As a candidate in 2018, he was asked: “Will you pledge as governor to veto any state legislative redistricting map proposal that is in any way drafted or created by legislators, political party leaders and/or their staffs or allies?”

Earlier this month, Senate and House Republicans introduced the People’s Independent Maps Act that would create a truly independent commission to draw maps and take insiders out of the process.

The People’s Independent Maps Act, Senate Bill 1325, uses identical language from SJRCA 0004, a constitutional amendment for an independent redistricting commission introduced by Sen. Julie Morrison in 2019. That resolution garnered 37 co-sponsors in the Senate including 18 Democrats. A similar independent commission amendment co-sponsored by Speaker of the House Chris Welch passed the House in 2016 with 105 YES votes.